I try to repot all plants at least every two years, which means half this year and the other half next year. I do this late August, September, October and November, after that it gets too hot in summer. You can repot a few more in March, early April when roots are showing.

The plants that I first repot are those that are growing over the side of the pots, any plants that are under stress, usually caused by a poor root system and the break-down of the potting material. Any sign of disease such as dead or dying bulbs or the rhizome turning black. 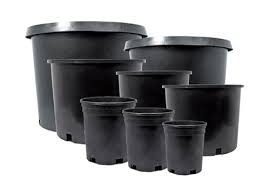 Various sizes will be needed, depending on the size of the plants to be potted, squat plastic pots are preferred. They need to have good drainage, i.e.; plenty of holes in the base. Why plastic; they are easy to clean and sterilize, they are light weight, Do not absorb diseases and are cheap to buy.

There has always been debate and questions about pots, especially clay against plastic. There are things fore and against them both, I Will try and explain these to you and what the manufacturer has tried to achieve.

CLAY: They were universally used in the early to mid 1900, they were originally made with just one hole in the base for drainage. It was found to block up with potting material so stone, pieces of broken pots were used to keep the hole from clogging; which is often referred to as crock. The problems with clay pots, is that they are heavy, especially with a big number of plants on the bench. They absorb salts from fertilizers, some diseases and are difficult to sterilize. Plant roots cling strongly to the pots. Because of their weight, they are good to keep tall plants upright.

They also stop excessive wetness in the potting material by absorbing the water and releasing it as humidity during the day. The single hole pots eventually gave Way to more holes being put in the sides of the pots for better ventilation. 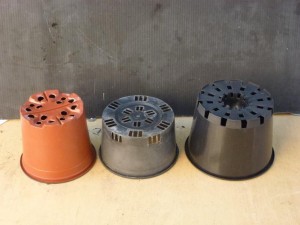 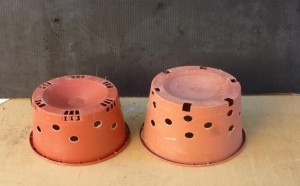 Plastic Pots: These pots became available in the late fifties, early sixties, and were well received by growers. Walter Barr were the most popular brand, from 50mm square to 175mm round pots. They had a raised base with slots around the outer edge for good drainage. Over the next forty years the pot manufactures have worked hard on the development to get the quality of pot we have today.

Most have their bases perforated with holes, some also have some slots in their side near the base. Some have sloped bases and even have raised domes in the middle of the base. They are light weight, stackable in large numbers, much cheaper than clay pots, better drained, easier to remove plants for re-potting, much easier to clean and sterilize for reuse. They do not absorb salts or disease.

The aim of the manufacturers is to produce a pot that has good drainage, plenty of holes in the base, tapering outwards from the base, makes it Easier to remove the plant, fits pot hangers,(does not fall through) easily stackable, not too deep, (causes plant to stay too wet) and sizes to suit the plant from seedling to flowering.

To reuse the pots, I clean the pots with a pot scrubber brush in Alginox, 10ml to a litre of water, they are then put in 25% bleach to 75% water for 24 hrs, then washed with a hose and let dry. The clay pots, after washing are let dry for a few days, before they are put in the bleach, this allows the bleach to penetrate well into the clay